Another Jack Reacher is Born

Spoiler Alert!  If you don’t want to know a tidbit of information about the new MISSION IMPOSSIBLE movie, don’t read any further.

So I went to see the new MISSION IMPOSSIBLE movie the other night, even though I knew Tom Cruise was in it, for the sole purpose of watching Sawyer from LOST. Well, he dies within the first 90 seconds! Are you kidding me?!?!? Oh wait, here comes a flash back with him. No, sorry, only another 90 seconds long. Great. Juuuuust great.

All of this brought me back to how much I DO NOT want Tom to play my Jack Reacher in the upcoming Ian Child film. And then it hit me who would be another better choice for Reacher over Tom: Sawyer from LOST. Yes, that’s right, the guy who gets killed off in the first 90 seconds! Jack Holloway. 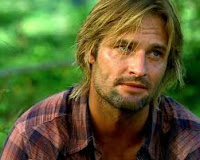 Am I right, Reacher fans?

All in all, the movie was a good action movie, if you like non-stop action movies.  But then, I went to see SHERLOCK HOLMES and that action was much less, well, “Tom Cruise-y.” Holmes’ action was creative which made for a more entertaining film. And Robert Downey Jr. doesn’t run as funny as Tom Cruise does.

Question: Did you see either movie?