Lead Me Beside Still Waters—Please! 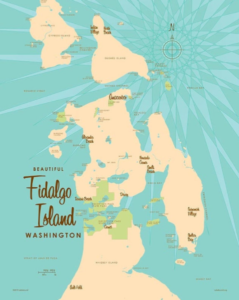 I like to think that, though I am not necessarily athletic in a sporty kind of way, I am fit and coordinated enough to do physical activities. I say this knowing that I blew out my right knee by attempting to leap up on a 4-foot pillar, broke my arm by tripping over a water hose while roller skating and my Portland to Coast Walking team came in dead last (more than once!). So it seems I may not have a good sense of reality in this department.

My father lived to be three 3 weeks shy of his 99th birthday and my 93-year-old mother is physically going strong, so I come from good genes. Maybe if American Ninja Warrior had been around when I was younger I could have been a contender (and given Jesse Flex Labreck a run for the title of most buzzers hit by a woman). But I’m sure that idea makes those of you who know me roll your eyes a little.

I was in thin in the 1980’s when Jane Fonda made it big with her aerobics workout video empire. I had a closet full of colorful leotards and faithfully made it to the gym most days after work. That kept me in great shape. Then, a few years into it, my attendance started to drop off a bit. I slowly noticed my clothes getting tight. EEK! At that age though it was very easy to get back in shape with just a few visits with Jane or my local gym for a sweaty aerobics class. That cycle continued for a couple of decades. Then my fifties hit, and I couldn’t seem to lose the tight clothes feeling. So, I just bought a bigger size. And then another bigger size. And then another until I found myself eating cookies and crying while watching The Biggest Loser.

Last Saturday a friend and I (my Dear Dawn) took a 3-hour Kayak tour around Fidalgo Island (home of my beautiful Anacortes). I chuckle now thinking that it was a 3-hour tour just like the castaways on Gilligan’s Island. And for a while there Dawn and I thought we might end up being Ginger and Mary Ann (you can decide who was who). But our tour guide, Alex, seemed much better qualified than Gilligan and the Skipper.

I had taken the same tour several summers ago and did just fine so I wasn’t worried. But that tour was in the summer (and I was a few pounds lighter) and this tour was on a cold, windy October day. We were one of three sets of tandem kayaks led by a single kayak leader. We floated gracefully through the marina, but when we hit the channel leading over to Barrows Island the strong winds hit. It was at that moment I really regretted getting rid of my Jane Fonda videos, because being in better shape would have come in very handy.

The person in the back of a tandem sea kayak has the honor of steering. It is a contraption using your feet so I gave that job to Dawn (because she trips less than I do). She couldn’t see very well so I, ever so politely, would holler LEFT or RIGHT as needed. (I told her the PLEASE was implied.) We managed to keep up with the other boats, though in last place of course (in honor of my PTC team) and made it over to Barrows. The water between the two islands was much calmer and I thought the tough part was over. Surely the wind would be moving in our favor going the other direction (wrong). Rounding the tip of Barrows, the wind slammed in our faces again. It seemed much harder, but it may have been that I was just more tired.

I noticed we were going in the other direction as our tour group, so I hollered LEFT. LEFT!! LEFT!!!! Dawn informed me that the steering wasn’t working, and hollering LEFT wasn’t helping. So instead, I hollered ALEX! ALEX!!! ALEX!!! Then Dawn informed me there was no way she could hear me so hollering ALEX wasn’t helping either. I couldn’t stand the thought of heading the wrong direction only to have to retrace that area to get back to where we were supposed to be. Suddenly, as if angels from heaven, two nice looking young men kayaked up to us and saved the day. By the time Alex realized the two old broads on her tour needed rescuing, and made it over to us, our two handsome helpers had repaired the broken foot-steering-thingy and we were good to go. Alex announced the water was extremely rough (like we needed telling) and to just put our heads down and go. And go we did.

What was supposed to be a 3-hour tour took a tad bit longer, but we eventually made it back. The entire time three things kept running through my head. One, I hope Dawn doesn’t hate me for suggesting we Kayak in October. Two, if only I was a few pounds lighter. And three, Lord Jesus give me the strength I need to do this!!!!! He of course did because he always does. And plus, Dawn could never hate me. As for the few pounds, well I’m working on that.

As a Christian who has made it to sixty-one years old, I know to ask God for help. I also know He will help, but I need to take some proactive steps of faith. I used to think that just praying made things happen, and it is a vital first step. God wants that intimate communication and communion with Him. But it’s through the time spent with Him (prior to kayaking emergencies) that He’s able to remind us the steps to take when we need it. There are those times, after praying, that we sit back and watch God work. But there are also times when, through our praying, God shows us proactive steps to take.

So back to the gale force winds kayak trip. I kept saying, “Lord, help me” and I knew He would, but what was my role? I’m a musician so the paddling of the Kayak took on a rhythmic cadence. Every time the right side of the paddle went in the water I’d say, “God is good” and then breathe when the left side entered the water. The next time I said, “Jesus is Lord” and then breathe when the left side entered again. Then, “The Holy Spirit comforts and guides” followed by a breath. I just kept repeating that over and over as the rhythm of the paddling took on a meditative motion. Those three phrases just happen to be how I begin most of my prayer and Bible study times, so it was a natural transition into saving me from the embarrassment of being towed back to the marina.

Once we were home the weather report was issuing a small craft warning because of gale force winds. I gotta say I was a bit more impressed with myself and Dawn once we heard that. And Alex said we killed it. So, there’s that.

Psalm 23, that famous Psalm, was my reward at the end of that trip. My shepherd led me to still waters. We will often find ourselves in rough waters, sometimes by our doing and sometimes by no fault of our own. I guess being out on the rough Puget Sound waters in gale force winds in October was my own fault, but it is what I’ve learned when I’m by still waters that helped me get back to safety. I could have spent the struggle swearing and being mad and frustrated. Instead, I chose to proactively turn to God for help. Saying, Lord Jesus help me, was the first step. Then he showed me my next steps.

God doesn’t need our help to save us, but does desire us to learn and grow in difficult situations. If he just miraculously intervened each time we asked we’d be stuck in our childish ways. Our faith grows when we’re challenged. If we build our relationship with the Lord while we are by the still waters, then, when the rough seas come, the Holy Spirit will reveal His rescue plan. And our faith will be even stronger for the next rough patch.

I am so glad God is in control and that I’ve lived long enough to see it in action many, many times. I want to encourage you to endure through the end of your rough waters. If God had sent a lifeboat instead of those two handsome young men to help us, it would have robbed us of our victory in that ever so difficult paddle back to the marina. And if felt so good to have done just that.