A Noise by Any Other Name 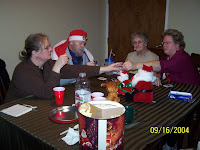 I was playing Kings in the Corner with my parents the other night.  It’s a fun little tradition we have and that night it was just the three of us.  There is no skill whatsoever involved in this card game.  That evening I won 4 hands, Mom 2 and Daddy one.  It’s on those nights I say the game may involve some skill.  We were having our usual enjoyable time when, after a few hands, I started making a rather obnoxious noise.
Now those of you who know me well can attest to the fact I have a habit of doing such things unconsciously, and quite innocently I might add.  Had my sisters or any of my friends been there they would have commented on it the first time I uttered the strange string of sounds.  And they most definitely would have put a stop to it had I gone on for too long.
This particular noise was a new one for me and a difficult one to describe.  Normally I would just burst into song because of something someone said.  Or I’d make a brief sound effect mimicking some racket in the room.  But that night it was a strange, throaty chant I kept making over and over again.  I have no earthly idea why, so don’t bother asking.
After I few minutes, I finally became aware of what I was doing.  I looked up at my parents and they were busily planning their Kings in the Corner strategy.  Surely they were hearing this.  Daddy is 93 and needs a hearing aid but for heaven’s sake even he should be able to hear my strange gurgling.  Mother didn’t even glance up.  So of course that challenged me to make the sound even louder and more obnoxiously.  Still there was no reaction.
Finally, when I could take it no longer, I asked why I wasn’t irritating them to the point of kicking me out.  They had no idea what I was talking about.  I then proceeded to make the noise for them.  They began laughing, and my sweet mother said, “Oh honey, we started tuning you out years ago. We don’t even notice things like that anymore.”
Parents are a strange and special breed.  It takes a certain unconditional love, that’s for sure.  Since I never married and had children of my own I often wonder what kind of parent I would have been.  Hopefully I would have been the kind that let my daughter win at silly card games and loved her in spite of any annoying quirks.
Question:  Any habits you have that others may or may not tolerate?